Bal Singh was honoured at a special ceremony at Buckingham Palace hosted by HRH The Duke of Cambridge for his outstanding contribution and service to football. Bal Singh was one of the 150 volunteers celebrated on Monday 7 October at an event that formed part of The Football Associations 150th anniversary celebrations. The volunteers had all been chosen for their outstanding contribution and service to football.

Bal Singh founded the Khalsa Football Academy (KFA) in 1988 and this season celebrates Its 25th year anniversary. The KFA is an organisation which supports young people through football initiatives that challenge stereotypes & racism, provide programmes of healthy living & lifestyles, tackle anti-social behaviour and ultimately provide a platform for children to voice their concerns. The KFA have been delivering soccer initiatives and workshops during the past 25 years. Further information about The KFA initiatives is available by visiting www.THEKFA.com

HRH The Duke of Cambridge, in his official capacity as President of The Football Association, hosted the event with FA chairman Greg Dyke. HRH The Duke of Cambridge presented Bal Singh with a medal to commemorate his achievements. The event was created to champion the huge role that volunteers play in football on a weekly basis. The nationwide network of grass roots heroes totals more than 400,000 individuals.

The day also included Buckingham Palace garden host its first ever football match, featuring two of the oldest amateur clubs in England. The game, which was an official Southern Amateur League fixture, was played between Civil Service FC, the sole surviving club from the eleven that met to create The FA in 1863, and Polytechnic FC, which was formed in 1875.

Greg Dyke, Chairman of The Football Association, said: “These volunteers are the heartbeat of football. Without them, the game simply wouldn’t function at a grass roots level and it is only right that The FA honours their tireless and selfless work.
“We are delighted that, in his role as President of The FA, HRH The Duke of Cambridge has given his support to this initiative – even going as far as arranging for the first ever game of football played at Buckingham Palace in honour of our grass roots heroes.”

HRH The Duke of Cambridge, President of The Football Association, said: “In our 150th year, it is hugely important for The FA to honour the efforts of the many thousands of volunteers who week in, week out, help to provide the opportunity for millions more people to enjoy football at grass roots level. Inviting 150 of these volunteers to Buckingham Palace is a fitting way for The FA to pay tribute and give thanks.”

BAL SINGH “I have faced numerous barriers in life but football has given me Self-confidence on and off the field. Self-confidence is a key part of being a Football Coach. It reflects what you think about yourself and your self worth. 25 years ago I was told because I was a Sikh I would never be successful as a Football Coach. However without my identity and beliefs I would not of achieved half of what I have achieved in grass roots Football. The greatest pleasure in life is doing what people say you cannot do. I like to thank friends, family and supporters of Khalsa Football Academy over the past 25 years. This service to football honour is dedicated to my Son Ajeet Singh.” 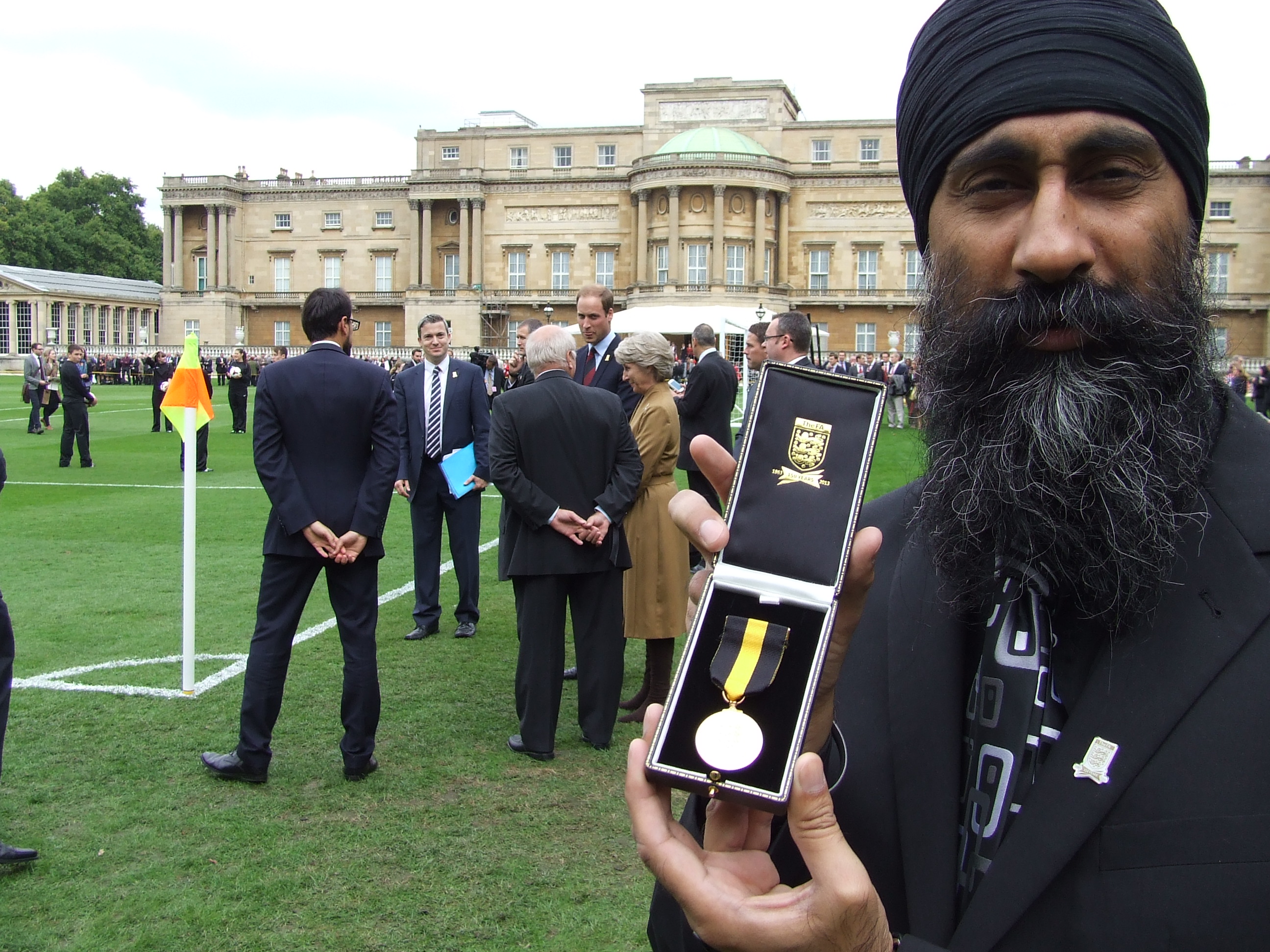